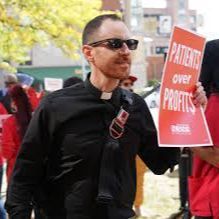 The Labor-Religion Coalition of New York State and the New York State Poor People’s Campaign are convening Moral Monday: Memorial and Call to Action, on Monday September 12, 12 -2 pm, at the West Capitol Park in Albany. Speaking with HMM Producer Cathy Silber, Rev. Joseph Paparone describes the event in the context of an ongoing, broad-based movement against policy violence that inflicts preventable harms upon the poor and dispossessed.