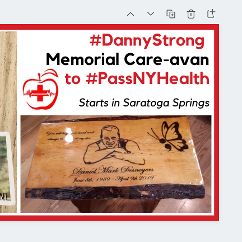 Scott Desnoyers’s son committed suicide shortly after his medication was cut off when he missed a monthly $20 payment to a state health care program. He is organizing a car protest at Assemblymember Woerner’s office in Saratoga Springs on June 5th to demand that she support enact of NY Health, a state single-payer proposal that has widespread support in the legislature but which has been blocked by the leadership especially in the State Senate. With Mark Dunlea for Hudson Mohawk Radio Network.