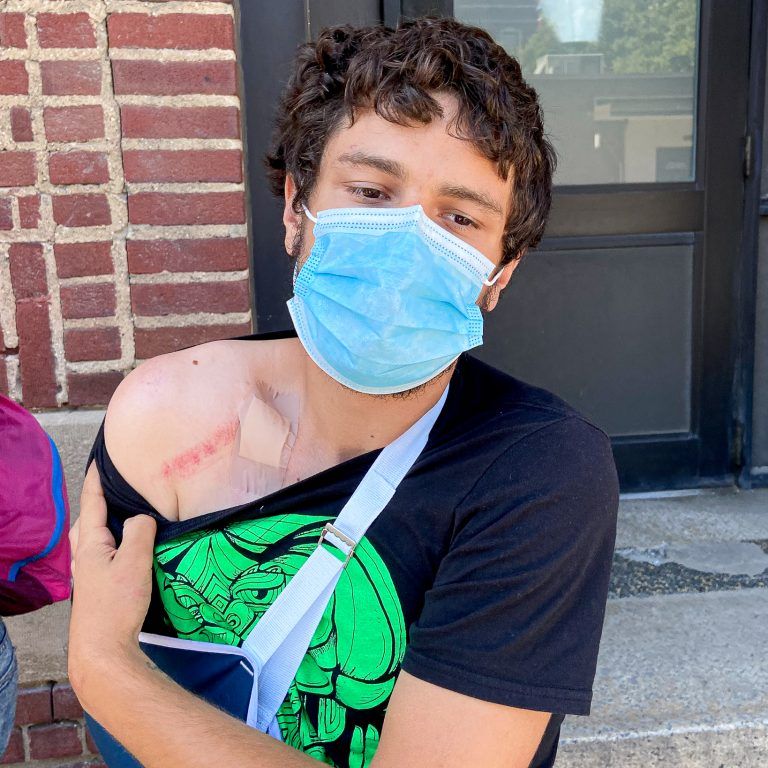 Rapid response today from local activists at the Troy Police Department on 6th Avenue. Troy resident Kenneth Zeoli says that he was thrown down a flight of stairs and beaten by Sergeant Sean Kittle. Zeoli was at the station house requesting to file a complaint form about the removal of benches from Barker Park. After about 20 minutes, Zeoli was arrested by sergeant Kittle at about 8:15 am. He was released at approximately 11am after having been thrown down the stairs and left in solitary confinement for 3 hours, where he suffered a seizure. As a friend drove Zeoli to an urgent care, protestors gathered outside the station in support and to request complaint forms. You will hear Kenneth Zeoli speak just before he left for the urgent care, followed by Tasheca Medina, who is pictured using the bullhorn.

Zeoli later returned, his arm in a sling, to the protest to speak with news crews. He said he was ok, but felt that something was broken and would need further medical care. He was also grateful for the people who had come to support him.

The protest outside the Troy Police Department lasted until about 2pm, after about 3 hours of unrelenting pressure on the department. The protestors had one demand: give everyone who was requesting one a complaint form.

Throughout Friday’s pop-up protest in response to the Police assault on Kenneth Zeoli by Troy Police Sergeant Sean Kittle, the main entrance of the Police Department was locked and those who were calling the building received no answer. Officers did come to the door at certain points but did not produce a complaint form. At least a hundred people gathered at the building demanding complaint forms, with Troy City Councilmember Anasha Cummings standing amongst them. After about an hour of demanding complaint forms without receiving them, the protestors decided to risk arrest and block traffic in the intersection of State St. and 6th Ave. Around that point, Kenneth Zeoli returned to the scene with his arm in a sling; his legal counsel was escorted into the building to file a form on his behalf. After another hour, one form was given to protestors, and it seemed that the department either did not have more complaint forms or would not circulate them.

One individual was knocked down by a vehicle in the intersection of 6th Avenue and State Street. The driver of the vehicle was arrested. The protestors then dispersed to Barker Park.