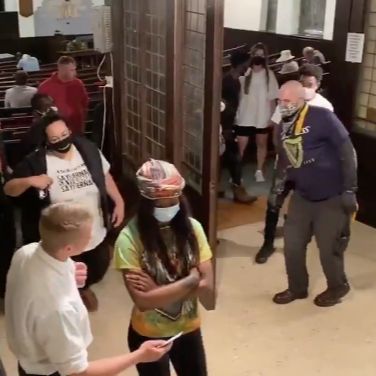 On June 28th, a group of Black Lives Matters activists protested an AR-15 Rifle giveaway held by Troy’s Grace Baptist Church. At the end of that protest, a confrontation between the congregation and the protestors, caught on film by the church, was reported and tweeted by conservative news outlets as evidence that BLM protestors are “dangerous” and attempting a “Marxist takeover.” But the footage shared by right-wing figures doesn’t tell the whole story of what happened.

In response to this incomplete telling of the story of Troy’s Grace Baptist Church and its relationship with Black Lives Matter, Tyler McNeil, a reporter for Them & Us media, wrote a deep-dive on the contentious history of the church, its pastor John Koletas, and what really happened during the events of June 28th and June 28th 2020. He joined HMM’s Alexis Goldsmith to discuss the story, and what national media chose to include or not include in their version of events.