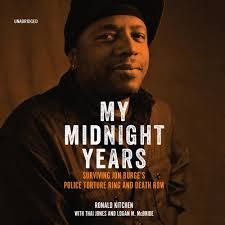 Hudson Mohawk Magazine correspondent Steve Pierce speaks with author/activist Ronald Kitchen who, In 1988, was tortured by Chicago Police detectives into confessing to a murder he did not commit. After 21 years in prison and more than a decade on death row, he was finally exonerated. In “My Midnight Years: Surviving Jon Burge’s Police Torture Ring and Death Row,” Kitchen and co-authors Thai Jones and Logan M. McBride tell his story.

Ronald Kitchen will be appearing with his co-author Thai Jones and Dr. Alice Green of the Center for Law and Justice on Friday, November 30, 2018 at The Sanctuary for Independent Media in Troy.