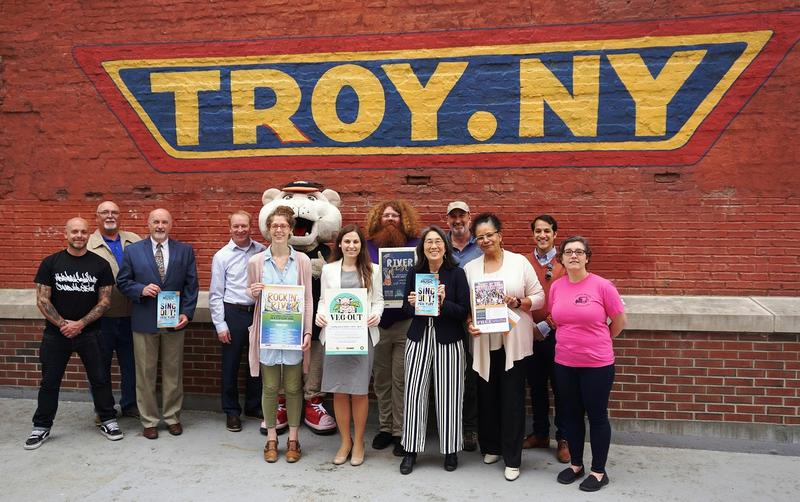 Mayor Patrick Madden joined officials with Downtown Troy BID and event organizers today to announce summer activities planned in the Collar City.
The calendar of 2019 concerts, cultural celebrations, street festivals, and sporting events kicked off Thursday with the American Music Festival presented by the Albany Symphony Orchestra, and continues through September.
Albany Symphony executive director Anna Kuwabara:   “This is our 11th season of having the American Music Festival in Troy and there’s a really wonderful fit because Troy is such a confluence of creativity and innovation and history, and I’m gonna add good food, although we’re not really a food organization, but, all those things are really wonderful and a wonderful place for the Albany Symphony to be, here.  Our festival is ‘Sing Out New York’ this year and our tagline is ‘From Seneca to Stonewall,’ and it is anchored by two important anniversaries. So we have the passage of the 19th Amendment, the 100th centennial coming up, so that’s the Seneca part, and then the women’s right to vote, and then Stonewall, the 50th anniversary of Stonewall, an important milestone in LGBTQ rights. So our composers are all working around those themes.”
Another musical event, the Spirit of the Suffragettes music festival and community resource fair, intends to reflect the struggles of people everywhere by speaking to the trajectory of the woman’s movement from a century ago to the present day.  Madden says Troy is going to be a hub of summer fun.  “We have a great line-up this year. We have food for your stomach, music for your mind, beer for your belly, we have everything going on in Troy.”
Katie Hammon is Executive Director of the Downtown Troy Business Improvement District.    “We kick off with Rockin’ on the River next week, on Wednesday, and we’ll be here for 10 straight weeks with an eclectic mix of music for you guys.  On Wednesday June 12th we start with ‘Live at the Fillmore,’ they’re an Allman Brothers tribute band.”
Hammon says Rockin’ on the River takes place very Wednesday from June 12th to August 7th.
The Capital Region Vegan Network is hosting its first-ever VEG OUT food festival in Troy on Sunday. And the Tri-City ValleyCats are back to play baseball at “The Joe” for an 18th consecutive year.
Madden adds there are other sporting events along with weekend displays of classic cars along River Street.   “If you are bored in the city of Troy this summer, I’m not sure what to say about’cha. There’s something for everyone, lots of kid-friendly events, adult events, come down and join us…”

Rockin’ on the River
Wednesdays, June 5 through August 7 | 5 pm to 8:30 pm
Riverfront Park, Downtown Troy
A free, 10-week summer concert series held on Wednesday nights in Riverfront Park. This summer’s roster features many talented musicians, both national and local – all excited to give Troy concert goers a memorable experience. The series is situated in historic, walkable downtown Troy with scenic views of the Hudson River and easy access to Shopping, Dining and Exploring before and after the show. For info, visit downtowntroy.org/rockin-on-the-river.