Troy merchants to set up Sunday in Colonie Center 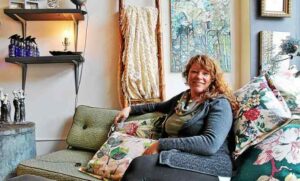 By Lauren Halligan, The Record
COLONIE, N.Y. >> A group of Troy merchants are setting up shop at the mall this weekend, in a new collective pop-up called #ShopTroyNY.
Following the launch of a social media campaign called #ShopTroyNY, downtown Troy entrepreneurs are teaming up to make a pop-up shop in Colonie Center Mall.
The idea is to get people to shop small at the mall, said organizer Robilee McIntyre, owner of Fuzzy Lightbulb Studio and Broccolis on River Street in Troy.
The #ShopTroyNY pop-up will debut this Sunday, from 11 am. to 6 p.m. inside the mall in front of Boscovs on the first floor, featuring merchandise from more than a dozen retailers based in the Collar City’s downtown district. Highlights of Sunday’s event will include exclusive deals and giveaways, body marbling by Fuzzy Lightbulb Studio and pottery throwing by Broken Mold Pottery Studio, along with the opportunity to shop local Troy businesses in Colonie Center and meet the shop owners.
Then, the #ShopTroyNY pop-up is scheduled to take place once a month through April on the second Sunday of each month: Feb. 11, March 11 and April 8.
This unique shopping experience is meant to draw awareness to the shops of downtown Troy and the shop small movement.
#ShopTroyNY started out as an Instagram campaign to raise awareness about the large amount of women-owned downtown shops. Since its inception, McIntyre has also started a radio show through the Troy-based Sanctuary for Independent Media’s WOOC 105.3 FM interviewing several female entrepreneurs or “lady bosses” of downtown Troy.
In the last few months, the initiative has turned into a platform to inform and engage customers about all of the vibrant and eclectic retail businesses in downtown Troy.
This weekend, #ShopTroyNY is hitting the mall to physically get in front of shoppers.
Though supporting small local businesses and shopping at the mall don’t traditionally go together, a change is happening in the retail industry.
“We try to work with local vendors to do pop-ups in the mall and get exposure for small businesses to do business in the mall,” said Colonie Center Mall’s specialty leasing manager Marie Bellino, who originally approached McIntyre and other downtown shops about the mall opportunity. “We’ve had a bunch of different pop-ups for small businesses come in and out on a weekend basis.”
While the mall has hosted different craft shows with groups of vendors in the past, Bellino said, this is the first time multiple brick-and-mortar shop owners from a neighborhood had banded together to do a pop-up.
The downtown Troy business owners are doing this now, in the winter months, partly because of the foot traffic they lose when the Troy Waterfront Farmers Market moves to its indoor location, rather than setting up on River Street.
“I don’t think it’s any surprise to anyone that it’s slower in the wintertime for all of the retail shops that are downtown. Even though we have a lot of great things to offer, the weather can be a deterrent occasionally,” said Lacey Davidson, owner of women’s clothing boutique Copper Fox on River Street on why she decided to participate in the #ShopTroyNY pop-up.
Though it wasn’t appealing for Copper Fox to do a pop-up event by itself, when the idea arose to book a series of pop-ups together with other downtown retailers, Davidson was all for it. “Troy is such a large group of funky people that love to work together.” So, they decided to collectively make a cool, happening event inside the mall, she said, one that could give them more exposure and drive more business to Troy.
At Sunday’s event, Copper Fox will offer customers an exclusive coupon if they visit the River Street shop, hopefully enticing them to try out downtown shopping in the future — even during the off-season.
Beyond escaping the cold weather, there are other perks of being in the mall like reaching a new demographic of customers across the river. Instead of seeing Colonie Center Mall as the competition, McIntyre and her peers have adopted the mentality of “If you can’t beat ’em, join ’em,” she said, adding that malls are also struggling with the rise of online shopping.
Some of the downtown Troy businesses involved with the upcoming #ShopTroyNY pop-ups are Broccolis, Copper Fox, Broken Mold Pottery Studio, Henry Loves Betty, Topsy Curvy Boutique, Troy Cloth & Paper, Indigo Botanic Co. and ‘e ko logic.
By bringing their goods to the mall pop-up, “We can be ambassadors for Troy in this way,” McIntyre said.
The ultimate goal of these events is for the businesses involved to mutually benefit, and to help mall-shoppers understand how really special the shops and shop owners are in downtown Troy, McIntyre said, “to bring some of the Troy magic across the river.”
External Permalink: http://www.troyrecord.com/article/TR/20180109/NEWS/180109819