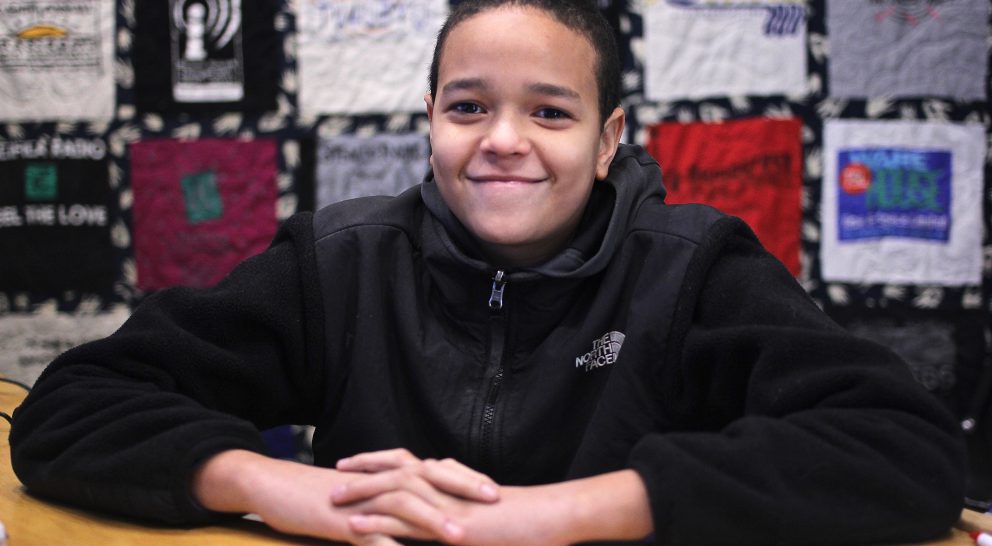 Katie Cusack
Eleven-year-old Traevon “Trae” Vautrin is a very busy intern. In the downstairs studio of The Sanctuary for Independent Media in Troy, he darts from the printer to the couch to the computer. He’s meant to be on the air in 20 minutes. He’s scribbling on papers and watching the clock as Hershel, the large dog-in-residence with drooping ears and (what can only be assumed by his warm and friendly nature) a heart of gold, watches him helplessly.
He stops fast in front of the dog in a comical, Norman Rockwell-esque moment.
“Hershel!” he wails, gripping handfuls of paper. “They’re killin’ me smalls, they’re killin’ me.”
Vautrin is here five days a week, working after school from 2:30 to 7:30 PM. He is also behind the scenes for special events and programs such as the seasonal Uptown Summer work program when school is out. As a young person growing up in Troy, an area that catches a bad rap in terms of safety and security, Vautrin has seen the worst and best parts of the city and his stronghold is the Sanctuary.

He has more than enough to do but he thrives under the expectations of his role. “I get to think that I’m doing a big part to help the community,” he says shyly.
He’s been coming to the Sanctuary for three years, going on four this summer, and is currently exploring the world of sound engineering with his mentors Steve Pierce and Jonah Moberg on the Sanctuary’s low-power radio station, WOOC 105.3 FM. He has shadowed for a few sessions, including the new live show, Hudson Mohawk Magazine, which covers local news and public affairs. Now he’s a regularly scheduled engineer on Tuesdays and Fridays. That’s in addition to being responsible for the community and youth calendar and script planning.
“It’s gotten a little bit more confusing,” he shrugs, referencing the soundboard, “but it’s quick to learn, too.”
When it’s down to the wire, he’s confident and assured. Friday afternoon, Vautrin was behind the controls on a solo mission, engineering an interview with Melissa Bromley and Lovonia Mallory. He slips on a pair of headphones, which look giant on his head, and gets down to business. Focused on the buttons and levels of the soundboard, he fiddles with the microphones, making random sounds and beats to test the sound. When Bromley attempts to guide him, he’s all spunk.