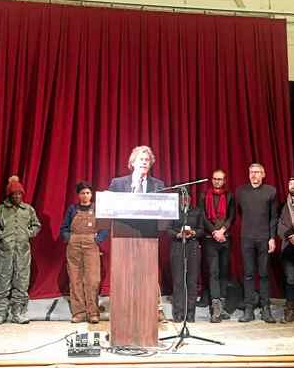 TROY, N.Y. >> More than a dozen concerned citizens gathered on a stage at The Sanctuary for Independent Media on Thursday night, only a couple of days after the state Attorney General’s Office issued a report ripping the conduct of the Troy Police Department in the fatal shooting of Edson Thevenin.
“We are not here to say that all policemen are bad, or policewomen for that matter, are bad because that’s not the case,” said organizer Anastasia Robertson. “But everybody, regardless, deserves fairness, an unbiased approach without prejudgment in how their case is handled.”
Dozens of people gathered in the crowd as four speakers urged Troy to establish a civilian review board, to accept the findings from the AG’s report, to establish body cameras for city police officers and dash cameras on police cars, and for the state’s Attorney General to take over the case of Dahmeek McDonald, who was shot by Troy police last year during a confrontation as he sat in his parked car along 8th Street.
Messiah Cooper, the uncle of McDonald, said justice couldn’t be served if Troy police investigated that specific shooting.
McDonald’s attorney, Mark Mishler, echoed his sentiments.
“From the beginning, we knew there would never be justice for Dahmeek McDonald as long as the Troy Police Department was involved in the investigation of the use of deadly force by Officer Jarad Iler against Dahmeek…,” said Mishler. “We knew this in the way that one knows such a thing with knowledge based on the historic experiences with the Troy Police Department, as well as from experience of how things generally work in this country when a black person is shot by the police. We can now state unequivocally we were right.”
Mishler said neither the pursuit of truth nor public accountability are the goals of the Troy Police Department.
Mishler said the public learned that when investigating an incident of police use of deadly force, the Troy Police Department “lies, actively covers up for officers, prejudges the outcome of their investigations, obstructs other agencies with expertise from participating in the investigation, grossly mishandles civilian witnesses including threatening civilian witnesses, fails to arrange for forensic analysis necessary to a proper investigation and fails to properly evaluate the evidence in its own possession.”
“These aren’t my words,” said Mishler, “This is the Attorney General of the state of New York report after an exhaustive and detailed investigation that they performed. This is shameful. The scope and depth of the cover-up by the Troy police in the Thevenin case is astounding and chilling.”
Mishler said the failure of city leaders to stand behind the AG’s report is “frankly nothing less than traumatic for people who live in Troy.”
In a report released Tuesday, state Attorney General Eric Schneiderman said an investigation by his office into the fatal April 17, 2016, shooting of Edson Thevenin, 37, of Watervliet, at the foot of the Collar City Bridge found Troy police Sgt. Randy French was not pinned between Thevenin’s car and his police vehicle when he opened fire, as the veteran officer had claimed during the initial probe. While Schneiderman said his investigation could not determine whether French was justified in shooting Thevenin eight times, he ripped Troy police, implying investigators were more concerned with clearing French than finding the truth.
To help prevent such behavior in the future, Justice for Dahmeek called for the city to not only implement recommendations from Schneiderman that included not to use prejudgment in future investigations, adopt a policy banning officers from shooting at moving vehicles and outfitting officers with bodycams or dashcams, but also to create a civilian board to oversee police policy and action. City Council President Carmella Mantello pointed out such a body already exists in the form of a Police Objective Review Committee established in 1997, but the eight-member group has been inactive since Mayor Patrick Madden took office in January 2016.
Justice for Dahmeek was formed after McDonald was shot in the shoulder and had his head grazed by a second shot fired by Iler, a five-year veteran of the Troy police force. That incident, which remains under investigation, sparked protests in the city’s North Central neighborhood and a march to City Hall after which Madden sat down with representatives of the group.
External Permalink: http://www.saratogian.com/general-news/20180119/protesters-in-troy-push-for-changes-in-wake-of-ags-report-on-fatal-shooting