Picks of the week 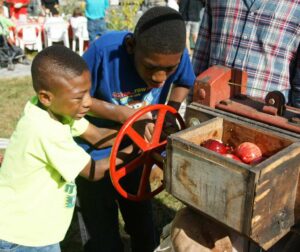 Jeri-yah [[CQCQ]] Ford, left, and his brother Jerry Ford III, both of South Troy, crush apples in a cider press during StoryHarvest Festival on Sept. 26. The event, sponsored by the Sanctuary for Independent Media, took place at Freedom Square, at 101st Street and Fifth and Sixth avenues in Troy’s North-Central neighborhood, and celebrated art, music, food, urban gardening and education. (Photo credit: Jon Flanders for the Sanctuary for Independent Media)

Friday
Comic Tim Meadows spent 10 seasons on “Saturday Night Live,” one of the longest runs of any “SNL” cast member. But Meadows, best known for his character Leon “The Ladies Man” Phelps, has had plenty to keep him busy since leaving the show back in 2000. He’s starred in several movies, including “Mean Girls,” “Grown Ups 2” and “The Ladies Man,” and he’s appeared in a recurring role on “The Goldbergs.” Meadows still performs live, and he’ll be cracking wise about politics and being a single dad with kids when he comes to town this week. 8 p.m. Friday. $30-$35. Cohoes Music Hall, 58 Remsen St., Cohoes. 518-953-0630; thecohoesmusichall.org

Thursday
For Dwayne Dopsie, zydeco music is in the family. Dopsie, who fronts the Zydeco Hell Raisers, is the son of Rockin’ Dopsie, who had big success in Europe and the U.S. in the 1970s and 1980s. Dwayne and the band were nominated for a 2018 Grammy Award for his album, “Top of the Mountain.” An accordion player, Dopsie plays high-energy zydeco music, something he’s been doing since he was 19 years old. Rolling Stone magazine called Dopsie “the Jimi Hendrix of the accordion,” according to Dopsie’s official website, dwaynedopsie.com.
8 p.m. Thursday. $20. The Linda: WAMC’s Performing Arts Studio, 339 Central Ave., Albany. 518-465-5233; thelinda.org
Saturday
The fall harvest is a time for celebration. At StoryHarvest 2018, you can enjoy a free community meal with vegetables grown by local farmers such as the Collard City Growers and Dennison Farms. The eighth annual festival, sponsored by Troy’s Sanctuary for Independent Media, also features a live performance by Rootbrew and Jenny Marie, art, food, and fun for kids. 3-6 p.m. Saturday. Free. The Sanctuary for Independent Media, 3361 6th Ave., Troy. 518-272-2390; mediasanctuary.org
Saturday
The Clay People are back, and it’s no reunion show. The alt-metal band, one of the Capital Region’s most popular bands in the 1990s, has a new album, “Demon Hero and Other Extraordinary Phantasmagoric Anomalies & Fables.” The disc was released this week on Albany’s Overit Records. Led by singer Dan Neet, the band found success with their self-titled 1998 release. The Clay People released 2007’s “Walking The Dead,” but internal conflicts and lineup changes caused numerous delays that kept the band from finishing and releasing “Demon Hero.” The Clay People will do a “throwback” show and record release party this week with Super 400, Blasé Debris, and Faced. 7 p.m. Saturday. $15. The Fuze Box, 12 Central Ave., Albany. 518-227-0271; http://facebook.com/Albany.FuzeBox
Sunday
Unicorns, a dark lord and a hero are all part of Michael Flatley’s latest Celtic dance celebration, “Lord of the Dance—Dangerous Games.” The show, which premiered in London in 2014 to celebrate the 20th anniversary of Flatley’s iconic “Lord of the Dance,” kicked off its U.S. tour in Maine earlier this week. “Dangerous Games” follows the Lord of the Dance and his fight against the Dark Lord and his army of Dark Disciples. An army of robots takes on the evil army, as a seductress tries to come between the Lord and Saoirse, his true love. Expertly choreographed dances, traditional Celtic music combined with electric guitars and a giant flat screen that spans the width of the stage has made “Dangerous Games” a winner with audiences worldwide. 8 p.m. Sunday. $34.50-$74.50. Palace Theatre, 19 Clinton Ave., Albany. 518-465-4663; palacealbany.com