The Sanctuary for Independent Media 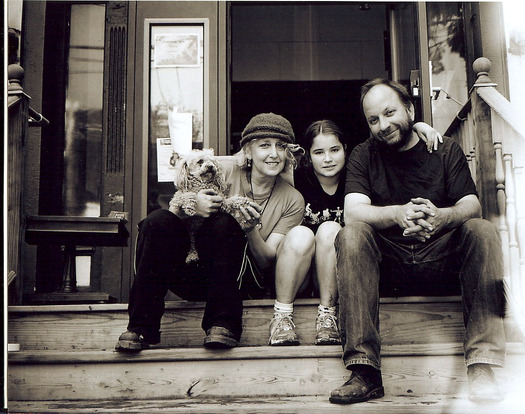 You probably remember the 2008 brouhaha over Iraqi artist Wafaa Bilal and the “Virtual Jihadi” video game that was booted from RPI. And you also may remember that Bilal’s exhibit ended up at a little space in Troy called the Sanctuary for Independent Media — which then got temporarily shutdown for code violations.

In the years since, the Sanctuary has continued to soldier on, providing a meeting space for seasoned and novice activists to train, listen, plan and party. Now, as protest culture blooms both here in the United States and around the world, the Sanctuary’s fall season is focused on “cultures of resistance.”

I talked with Sanctuary executive director Steve Pierce and art and education coordinator Branda Miller recently about emboldened protesters, media reform, the necessity of beingfor something, and allegedly humorless militants.

What do you think of the newly revitalized protest culture, between the Middle East,Wisconsin and now New York City? A lot of it seems to be spilling over to the Capital Region, between regular protests at the Capitol and emboldened campaigns like the one to allow chickens in Albany. Is this a blip, or is there a real change happening?

I think people everywhere are tired of being screwed over. But there’s a huge distinction between people who don’t have anything now and can’t see a better future either, and people who’ve had something and are seeing it taken away.

It’s great to see people around the world rising up against the puppet governments installed and propped up by nations who preach democracy while practicing colonialism. I hope they get something better; time will tell.

I think people everywhere are tired of being screwed over.
In the West, the rich have become richer at our expense; the institutions and programs created to help provide decent and meaningful lives have been undermined, and the basic freedoms we’ve struggled generations to achieve have been taken away. I don’t know why everyone isn’t in the streets protesting.

As far as the Capital Region, I see a core group of incredibly dedicated activists working on a range of issues and I think some of them are very effective. Overall, though, people aren’t as angry as they should be considering what’s happening to them, their children, their neighbors and the people around them — and much of the anger there is seems misdirected.

BM: Clearly, when people come together in great numbers, they can feel their potential power. Yet, as in the case of the protests in NYC at the beginning of our latest Iraq War, with millions across the world protesting, we could not succeed in stopping the war.

The protests are a reflection of a sea change — and that is important. To me, the important thing is to continue to plant seeds for real, substantive change, to work together towards a more just society — and that can happen coming together in mass protests, as well as working one on one in the community to make media with important messages from citizens that otherwise would remain unheard.

Obviously, activism has prompted real change in other countries. Do you think it can do the same in the US? What will it take?

SP: I think real media reform is going to have to precede real change in the United States. We’re getting an incredibly distorted view of what’s happening around this country and around the world, not to mention what’s causing it. The media monopoly has helped create such false consciousness that people aren’t even acting in their own self interest, much less acting to help others.

Many people in other countries have literally nothing to lose and they’re acting accordingly; many of us here are losing ground fast, but we have a relatively long way to go before utter desperation sets in. There’s been a staggering increase in overall poverty and especially hunger in the US over the past few years, much greater than most people seem to realize. Perhaps when the general perception of life catches up to the reality, there’ll be a change.

BM: Everyone needs to reflect individually on how they can effectively make change, and come to their own personal choice. Anger is a great motivator — when people are frustrated, and can’t take it any more, they are moved to act. But love — for oneself and for others, is the greatest motivator.

By connecting to that which makes us human, guided by our heart, we see ourselves in all other living beings. The survival of the planet is at stake.

What’s important for the 21st century activist to know? What can they learn from a place like the Sanctuary?

SP: The 21st century activist might want to avoid being dazzled by technology that is changing so rapidly that we miss the fact that the underlying social forces driving it aren’t changing much at all. I think history is a good thing to know, and here in the United States of Amnesia we don’t know much of it.

There are plenty of people to learn from at the Sanctuary: writers and filmmakers and musicians and just plain folks in the audience. The lesson of the Sanctuary itself might be that it’s important to invest in infrastructure to support social movements. Protest and resistance should be FOR something; we have to build alternative cultures to the dominant one that promotes violence and destruction.

Protest and resistance should be FOR something; we have to build alternative cultures to the dominant one that promotes violence and destruction.
Our primary focus is on media justice, the idea that access to the means of communication is a fundamental human right, and in this culture that means electronic media. For example, in Troy alone, Time Warner is strip mining a million dollars a month from its subscribers and sending the money to corporate headquarters in Delaware while denying us the public access cable infrastructure that’s been required by state and Federal law for decades. Social justice movements need media access to be effective, and we’ve done what little we can with the resources at our disposal to support local activists on a variety of issues: anti-war, labor, LGBT, environment, free speech, you name it. There’s lots more to be done.

A great example is the Uptown Summer activities we started this semester, a collaboration between Collard City Growers, Missing Link Street Ministry, Troy Bike Rescue, and Youth Media Sanctuary! We will continue to connect creative practice with nutritious food, bikes, urban justice gardening, and community and youth media — through this collaboration, we unite for environmental justice in the economically impoverished neighborhoods in North Troy.

Each creative act is a ripple in the pond, and the ripples grow into waves, the waves into a sea change.

Your new season is called Cultures of Resistance. But it seems like nearly every event that’s ever been at the Sanctuary fits into that category in some way. How will this season be different?

SP: I t
hink there’s an emerging realization that we have to build a real culture of resistance, not just resist, in order to effect change. We need sustainable, community-based institutions that can serve as platforms for change that might take decades to achieve, longer to secure and forever to protect. We just want to do our small part.

Some people think of activists as humorless and militant. Are they?

SP: Sounds like something a humorless, militant person might think. I guess there are all kinds of activists, just like anything else. The ones who inspire me are trying to make sure their time on Earth is making it a better place for everyone, not just themselves. The ones I see seem to be having at least their fair share of fun!

This interview has been edited and condensed.

The fall season at Sanctuary for Independent Media beings October 6 with a performance by Mali-based singer Sidi Touré and his band.