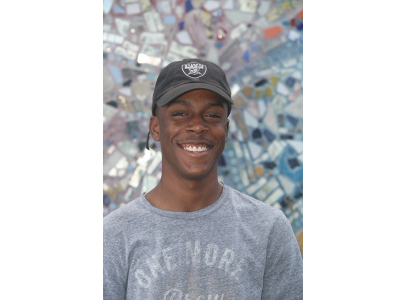 Can you tell us about your relationship with the chickens?

I like the chickens pretty well, but it’s nothing really serious. Chickens are cool. I try and catch them but then they mostly run away. I catch that one chicken all the time. Chickens like me some days, and some days they don’t, I guess. Felipe taught us how to hold the chickens and how to catch them. You’ve got to corner the chicken and then go in. It’s the best way to do it.

When did you first start skateboarding?

I actually first started skateboarding when I was six. My sister had brought me a skateboard that was actually broke that first week that I got it, so I went and got a new skateboard that same week. I could just go out on my skateboard and stay there all day. It helps me get to work pretty fast and to places that I need to get to pretty fast, too.

Do you ever encounter strange things on the street when you’re skateboarding?

When I was living in South Troy and I was skateboarding, I actually came across this guy in front of Dunkin’ Donuts and this guy was just dancing in front of Dunkin’ Donuts. For fifteen minutes straight! This guy was just dancing to Michael Jackson for no apparent reason, just out of the blue. There was a lot of weird stuff that happened. I can’t even think of them all now.

How do you think you’ve changed over the course of the summer?

I’ve become more mature, I guess. Every summer I become more mature. During the summer, I end up making more choices on my own, like whether I’m going to go here or over here. I think that’s a mature decision to do. It helps me get ready for school and all the things I have to do.

How would you describe what it’s like to live in Troy?

It’s nice to live in Troy–quiet and calm. People like to say that it’s a bad area, but I don’t see it. If you actually live here, then you could see that it’s actually not that bad out here. People always make judgements about what it’s like to live here and they go off on rumors. If you actually be here and see it yourself, you’d know that it’s not actually that bad.