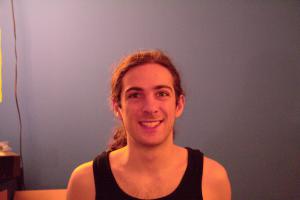 Jacob is a senior at Alfred State for Digital Media and Animation.  His college experience has shaped him into a generalist media artist who can complete a diverse range of artistic projects.  Recently, his teacher recommended him to apply for an internship at The Sanctuary, and a few weeks later he became a video ninja.

As a video ninja, he volunteered for a variety of tasks.  Some of them allowed for a wide range for creativity and potential, such as designing and animating a new 10th anniversary logo.  Other tasks were more subtle and meditative, such as organizing and renaming parts of the digital video library.  But most of them were in between the two extremes, such as doing a multicam edit of a filmed performance.  There was always something to do and he was never bored nor overwhelmed.