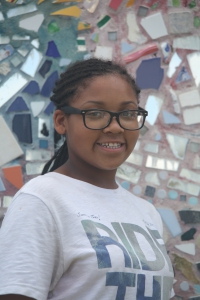 What was it like for you to first move to Troy from New York City?

It was quieter. At first, I thought there weren’t a ton of different people and they just would do the same things. Now that I’ve been here more, now I know more things to do in my free time.

Had you ever gardened before you came here?

I did a little bit of gardening with my grandma, but now I do it more often here. [My grandma’s garden] is a little patch in her backyard, but she’s trying to go bigger now that it’s summer. She has tomatoes right now. I don’t know if she’s got any more.

Do you have any specific childhood memories that you remember?

Probably the days around my birthday, because it’s the Fourth of July. There’s firecrackers with different people and family members cooking out. In the city, the parks are really big, so we’d have big cookouts with the family.

What kind of storytelling would you want to do in the future?

I write funny things, like comedy and all of that. Or documentaries on things that affect people around the neighborhood. It’s something different. I never used to do things like this.

What do you think is the power of media created by young people?

They don’t normally see young people doing things like this. Now that they see us doing it, they might change their views on what they think about.