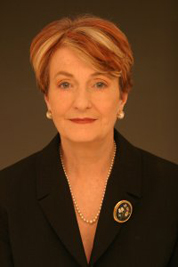 Author and activist Dr. Helen Caldicott will appear at 8 PM on Saturday, November 13, 2010 at The Sanctuary for Independent Media to talk about the past, present and future of anti-nuclear activism.  She is a pediatrician and an anti-nuclear activist, who opposes both nuclear weapons and nuclear power.

Helen Caldicott will be introduced by Lawrence Wittner, longtime historian at SUNY Albany who has written extensively about the impact of the worldwide nuclear disarmament movement upon nuclear weapons policies.

According to Caldicott, “Ninety-five percent of the approximately 23,000 nuclear weapons in the world are owned by the United States and Russia. The stark truth is that one single failure of nuclear deterrence could end human history. The operational and deployed nuclear arsenals of Russia and the U.S. hold the human race and all other species captive and at nuclear ransom. I am sickened that we still play this deadly game of nuclear risk with our fragile planet. There are no national or political goals that justify a war that could terminate human existence. What terrifying accident or act of aggression must happen to wake people and our leaders to this reality? This cannot be how we learn if we wish to avoid nuclear Armageddon, and nuclear winter.”

She adds, “There is no way to separate the production of nuclear electricity from the production of nuclear weapons. Nuclear power is the prodigal son of the weapons industry. Further, the enormous investment in nuclear electricity makes global warming a certainty because it siphons necessary funding away from the real solutions of renewable energy – solar, wind, geothermal, wave, tidal and of course conservation.”

Dr. Caldicott has a long and distinguished history in the anti-nuclear movement.

In the early 1970s she spearheaded an anti-nuclear movement in her native Australia, which forced an end to French nuclear testing in the South Pacific and managed to stop Australian uranium exports from 1975 to 1982. In the late 1970s and early 1980s, she became a leader in the anti-nuclear movement in the United States through her role in reviving the organization Physicians for Social Responsibility, which expanded rapidly during her presidency (which ran from 1978 to 1983). She helped found several other organizations which have worked to abolish controlled nuclear fission. Relying on her passionate oratory and intensely personal style, which are grounded in a thorough knowledge of the medical effects of exposure to radiation, she was particularly effective in raising grass-roots support and bringing nuclear issues to the forefront in the 1980s.

“Helen Caldicott has the rare ability to combine science with passion, logic with love, and urgency with humor,” says author Naomi Klein.

The single most articulate and passionate advocate of citizen action to remedy the nuclear and environmental crises, Dr Helen Caldicott, has devoted the last 38 years to an international campaign to educate the public about the medical hazards of the nuclear age and the necessary changes in human behavior to stop environmental destruction.

Born in Melbourne, Australia in 1938, Dr Caldicott received her medical degree from the University of Adelaide Medical School in 1961. She founded the Cystic Fibrosis Clinic at the Adelaide Children’s Hospital in 1975 and subsequently was an instructor in pediatrics at Harvard Medical School and on the staff of the Children’s Hospital Medical Center, Boston, Mass., until 1980 when she resigned to work full time on the prevention of nuclear war.

In 1971, Dr Caldicott played a major role in Australia’s opposition to French atmospheric nuclear testing in the Pacific; in 1975 she worked with the Australian trade unions to educate their members about the medical dangers of the nuclear fuel cycle, with particular reference to uranium mining.

While living in the United States from 1977 to 1986, she co-founded the Physicians for Social Responsibility, an organization of 23,000 doctors committed to educating their colleagues about the dangers of nuclear power, nuclear weapons and nuclear war. On trips abroad she helped start similar medical organizations in many other countries. The international umbrella group (International Physicians for the Prevention of Nuclear War) won the Nobel Peace Prize in 1985. She also founded the Women’s Action for Nuclear Disarmament (WAND) in the US in 1980.

Returning to Australia in 1987, Dr Caldicott ran for Federal Parliament as an independent. Defeating Charles Blunt, leader of the National Party, through preferential voting she ultimately lost the election by 600 votes out of 70,000 cast.

She moved back to the United States in 1995, lecturing at the New School for Social Research on the Media, Global Politics and the Environment, hosting a weekly radio talk show on WBAI (Pacifica), and becoming the Founding President of the STAR (Standing for Truth About Radiation) Foundation.

Dr Caldicott has received many prizes and awards for her work, including the Lannan Foundation’s 2003 Prize for Cultural Freedom and 21 honorary doctoral degrees, and she was personally nominated for the Nobel Peace Prize by Linus Pauling – himself a Nobel Laureate. The Smithsonian Institute has named Dr Caldicott as one of the most influential women of the 20th Century. She has written for numerous publications and has authored seven books, Nuclear Madness, Missile Envy, If You Love This Planet: A Plan to Heal the Earth (1992, W.W. Norton) and A Desperate Passion: An Autobiography (1996, W.W. Norton; published as A Passionate Life in Australia by Random House), The New Nuclear Danger: George Bush’s Military Industrial Complex (2001, The New Press in the US, UK and UK; Scribe Publishing in Australia and New Zealand; Lemniscaat Publishers in The Netherlands; and Hugendubel Verlag in Germany), Nuclear Power is Not the Answer (2006, The New Press in the US, UK and UK; Melbourne University Press in Australia) and War In Heaven (March 2007). Dr. Caldicott’s most recent book is the revised and updated If You Love This Planet (March 2009).

She also has been the subject of several films, including Eight Minutes to Midnight, nominated for an Academy Award in 1981, If You Love This Planet, which won the Academy Award for best documentary in 1982, and Helen’s War: portrait of a dissident, recipient of the Australian Film Institute Awards for Best Direction (Documentary) 2004, and the Sydney Film Festival Dendy Award for Best Documentary in 2004.

Dr Caldicott currently divides her time between Australia and the US where she lectures widely. She founded the US-based Nuclear Policy Research Institute (NPRI), which evolved into Beyond Nuclear, of which Dr Caldicott is Founding President. Beyond Nuclear aims to educate and activate the public about the connections between nuclear  power and nuclear weapons and the need to abandon both to safeguard our future.

Dr Caldicott can be heard discussing urgent planetary survival issues on her weekly radio show If You Love This Planet, and is the founder and spokesperson for People for a Nuclear-Free Australia, established to represent the millions of Australians who uphold the strong belief that there should be no uranium mining, nuclear power plants or foreign nuclear waste in Australia. She is also a member of the International Scientific Advisory Board advising José Luis Rodríguez Zapatero, Prime Minister of Spain.

This event is co-sponsored by Bethlehem Neighbors for Peace, and made possible by volunteer labor and contributions from thousands of patrons of The Sanctuary for Independent Media.