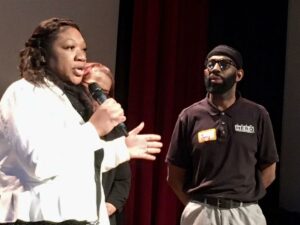 In honor of Dr. Martin Luther King Jr.’s birthday, the community gathering sought to promoted a participatory discussion on social, national and international issues facing communities on a local level.

Started in by the Solidarity Committee of the Capital District in 1999, the theme asks, where do we go from here?

Schenectady County Human Rights Commission, Executive Director, Ang Morris, who walked in the Women’s March this past weekend, spoke to Dr. King’s message of the urgency of now.

“Dr. King’s legacy right now, it’s a day of remembrance of his legacy and his life. But it’s very critical that we remember it but we act upon it, that we continue to act upon it. Definitely in 2020. Dr. King talked about in his I have a dream speech about the urgency of now and it’s very urgent that everyone stands up, speaks up for their rights, gets involved, takes action, get involved with voting, stand up and speak up about the census, make sure everyone is counted for,” Morris said of the need for action.

A short film shown at the program was an Aug. 1967 speech by King, touched on the “Three Evils of Society.” If one didn’t know any better many of the issues King spoke about sounded like they could’ve come from a Sen. Bernie Sanders speech in 2020.

“”Dr. King was a beloved civil rights icon. His rights, what he was talking about, 50 years ago, we are living in now, 50 years later. Those issues of economic justice, racial justice, racism, bigotry, antisemitism, all of those isms that he was talking about, we’re living in now. So it’s imperative that we today celebrate not only his legacy but take action, do it now, because this is the most critical election in the history of America and if people sit on the sidelines and don’t utilize their civil rights regarding voting, then we will continue to go through the nightmare of a dream that Dr. King didn’t have as a nightmare,” Morris said of those same issues facing society today.

“His dream is a nightmare now. We have to do that in the spirit of love, come together in unity, get involved, vote and also elect officials that vote for your rights, for your values and your issues that will stand up against the hatred and the bigotry that’s going on at 1600 Pennsylvania Avenue,” he continued.

Morris also noted why she believes it’s so important to forge a movement to address those issues.

“So that’s what we’re here to talk about those issues. It can’t be some kumbaya moment, this is not a moment, it’s a movement. Dr. King he paid with his life every day, he died for the cause and sacrificed his life. This is for me something I’m very passionate about because Dr. King was one of my civil rights heroes. Everything he did was in the spirit of love, love won people over, love trumps hate and biblically that love is the only thing that can change people,” Morris said.

Morris expounded upon the need for the community to take action as well.

“He talked about that beloved community and that’s why we’re here today, that’s why I’m here today to join forces with Troy. Say Dr. King’s legacy needs to be seen in Troy. No longer can people in Troy sit on the sidelines and continue the police brutality, continue to see blight, housing, poverty, all those issues in Troy that we’re facing all over the Capital Region, Troy needs to stand up, speak up and live the dream that Dr. King talked about in the spirit of love as urgent now,” Morris said.

Terry echoed those sentiments as to how the program discussion could translate out into communities like Troy and beyond.

“We’re going to take these community discussions outside this venue because we can’t do everything in here. We’re going to take it into various communities to involve more people and engage with them. We’re doing it with the purpose to educate them, organize them and we’ll hopefully persuade them to get involved in social justice issues,” Terry added.