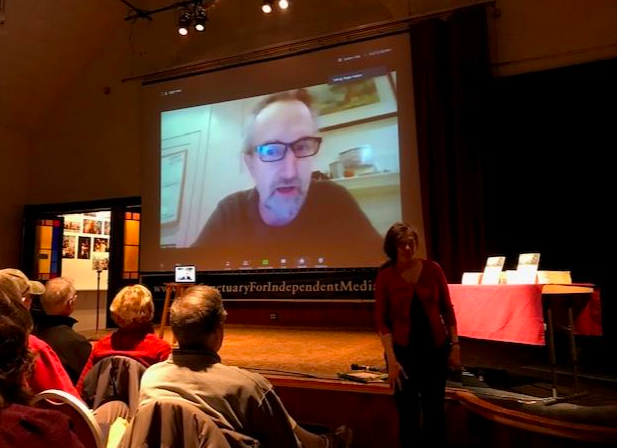 Troy — When it comes to climate change, the time for screwing around has long passed, says Roger Hallam. He actually didn’t say “screwing around,” choosing a less-printable verb, but you get the message.

For Hallam, the current political, legal and regulatory process moves too slowly to make the rapid changes he believes are needed to avert a human catastrophe stemming from global warming. As a result, people need to take matters into their own hands and rebel against a power structure that doesn’t want to change.

“It’s absolutely coming down the line,” said Hallam. “It’s going to be absolute hell,” he said of the constant floods, massive Australia-style wildfires, violent storms and famine-causing droughts he believes are facing the planet in the next few decades.

That’s why he helped found Extinction Rebellion, a growing group of non-violent but radical protestors who have been blocking traffic, bridge and subways in mass demonstrations, mostly in Europe, to get their point across.

The group, also known as XR, made headlines in October when they paralyzed central London in a street protest in which hundreds were arrested. They staged an earlier blockage in April as well.

In the Capitol Region, 11 activists were arrested in February when they blocked the entrance to Comptroller Tom DiNapoli’s office, demanding immediate divestment of state pension fund money from fossil fuel-related companies.

Hallam spoke to Capital Region climate activists Tuesday at the Sanctuary for Independent Media, a Troy-based community organization that creates videos and other media with an emphasis on social justice and environmental causes. They also put on events such as Tuesday’s talk by Hallam.

Hallam, though, talked with the roughly 100 people who attended via Skype from his home base in England. He had planned to visit Troy in person but was blocked from visiting the U.S., he said, when Homeland Security officials said he would need a visa.

Hallam, 53, was last year cleared by a jury of a “criminal damage” charge for his spray-painting “Divest from oil and gas,” on the walls at King’s College in London.

An organic farmer, Hallam had also been studying for a Ph.D at King’s College with a focus on social change through civil disobedience.

His work in that area informed much of the talk on Tuesday. While initially coming to the U.S. to promote his new book, “Common Sense for the 21st Century,” he wanted to visit Troy since it sounds to him like the kind of place where climate activists should be looking for support.

Rather than looking for new XR members in “trendy inner-city hipster areas,” he goes to blue collar, Rust Belt communities like Troy. Working people, he said, “understand how much it harder it’s going to be when the s&*t comes down the line.”

Hallam is decidedly in the group of climate change activists who believe the planet has reached a High Noon moment in which rising temperatures will create massive, unprecedented natural disasters, which will in turn create a social and economic collapse.

The current power structure of business and industry as well as political leaders, he says, simply aren’t equipped to decarbonize rapidly enough, thus the need for mass civil disobedience by those who will feel the brunt of these disruptions.

He also believes the actual protests should focus on disrupting locations that are power centers such as state or national capitols, where they can draw a lot of media attention by blocking traffic and day-to-day business.

“You need to close down fundamental parts of the economy,” Hallam told the Troy audience, who ranged in age from Generation Z’ers to Baby Boomers. “That sounds really harsh but that’s what it takes.”